In the Spring of 2014, I spent the semester interning at KUT, Austin’s NPR affiliate. As a reporting intern there, I spent most of my time contributing to StateImpact Texas. Using a variety of multimedia, I covered environmental and energy news.

Below are just a few samples of my work there. To see all my work with StateImpact, click here.

Standing on Guadalupe Street in Austin facing the tower at the University of Texas, 26-year-old Emily

The new line was marketed as a BRT system, but those buses still need tinkering to meet those requirements.

Mandell waits at the bus stop with a scowl on her face. She’s not looking forward to this ride.

The city of Austin’s transportation agency, Capital Metro, rolled out this new line in January* in an effort to get more people out of cars and using public transportation. But the rollout hasn’t gone as expected, calling into question how the agency will handle expanding transportation to meet the fast-growing city’s needs… 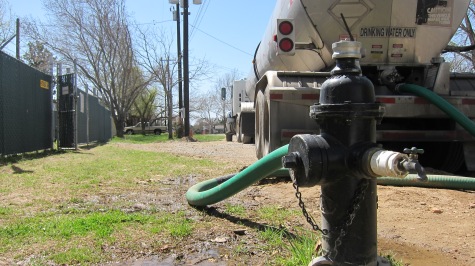 Behind the counter of a general store just off Highway 71, Kim Clifton, the cashier, shrugs her shoulders and shakes her head when asked about the lingering drought. “We just need more rain,” she says. She rolls her head back to let out an exasperated laugh, “Bring the rain! Bring it!”

It’s something you hear all the time these days across Texas, but chances are you’ll hear it the most in Spicewood Beach, Texas, a Lake Travis community about 40 miles from Austin. Just a little over two years ago, it made headlines as the first community in Texas to run out of water during the current drought.

In early 2012, the Lower Colorado River Authority (LCRA), which owns and manages the community’s water system, announced that groundwater levels were falling, leaving its well useless.

Those levels got so low LCRA began trucking in water five to six times a day as a temporary solution. Each load costs LCRA about 200 dollars…

To Adapt to Cimate Change in Texas, No One Size Fits All Solution

Texas is a state so huge that it experiences several different climate conditions, from the subtropical Eastern half (think swamps and hurricanes) to the semiarid West (desert and snow in the winter). As such, the state must wear a variety of hats as it navigates a changing climate.

Matei Georgescu, one of the scientists who worked on the study, says that “local decisions can play a role” in decreasing effects of urban expansion to make conditions more livable. And Texas is no exception.

As cities burst at the seams from surges in population, those cities become pollution hubs that Georgescu says will “result in about one to two degrees Celcius warming” that will spread beyond city limits…

Invasive Zebra Mussels May Have Finally Met Their Match

At first glance, zebra mussels appear harmless, perhaps even cute. But the tiny creatures are anything but cute for Texas lakes.

Originally from Eurasia, zebra mussels made their first appearance in North America in the Great Lakes in the early nineties. The mussels have since made their way to Texas, and over the years, this invasive species has proliferated in the state, killing off alarming numbers of native species and clogging pipes used for power plants, drinking water, manufacturing and boating. Now they may have finally met their match, in the form of microscopic bacteria.

Currently, zebra mussels are combated with several strategies, including chlorine and metal-based solutions, filtering systems and hot water. But none have proven capable of wiping them out.

“There is not one silver bullet that is effective in killing the mussels in all situations that won’t harm other species and keep our waters safe,” says Brian Van Zee, from theTexas Parks and Wildlife Department.